In 1966 Life magazine assigned famed photographer Gordon Parks to cover Muhammad Ali, the brash young boxing champion. Four years later in 1970, the two came together again for a second feature story in “The Great American Magazine.” These encounters framed a critical passage in the career of the controversial heavyweight, whose antiwar and black separatist views had led to widespread vilification in the United States. They also marked a significant moment of transition for Parks, then following up his remarkable success in photojournalism with new projects as an author, filmmaker and composer.

Collaborating on these two stories, Parks and Ali transcended their routine roles as journalist and athlete to make sense of an epoch and the American struggle against racial inequality, in which both were key players. Parks’ intimate perspective on Ali during this crucial period is indispensable to understanding the boxer called “the greatest of all time.” This book includes an expansive selection of photographs from Parks’ original reportage, many never before published, as well as reproductions of his original stories as they appeared in Life magazine.

When Gordon Parks photographed and proﬁled Muhammad Ali for Life magazine in 1966, and then photographed him again in 1970, in some ways he might just as easily have been making self-portraits and writing about himself. Both men were tenacious ﬁghters. Both men bore the scars of lifelong racism. Both men were internationally acclaimed, yet both were more devoted to speaking out for social justice than seeking out personal success. And though both were celebrated for their nonverbal art—Ali’s balletic boxing and Gordon’s poignant photography—what truly bound them together was their powerful use of words, speciﬁcally poetry, to express their optimism for the promise of America—and frustration with the reality. And, more important, to inspire positive change.

Yet Ali’s ascension to African American icon was not automatic in Gordon’s eyes. In his 1966 Life article, a wary Gordon had reservations about Ali’s ﬁtness to be a leader and spokesperson during the tumultuous and violent civil rights movement that clenched the country in an exasperated ﬁst. That year, James Meredith, the ﬁrst African American to attend the University of Mississippi, was shot and wounded by a sniper on the second day of his “March Against Fear,” and the NAACP’s Forrest County, Mississippi, chapter president Vernon Dahmer was killed by a ﬁre bomb. Emotions were raw and anger was high. But righteous indignation, no matter how justiﬁed, wasn’t the goal, Gordon knew. Change was the goal. 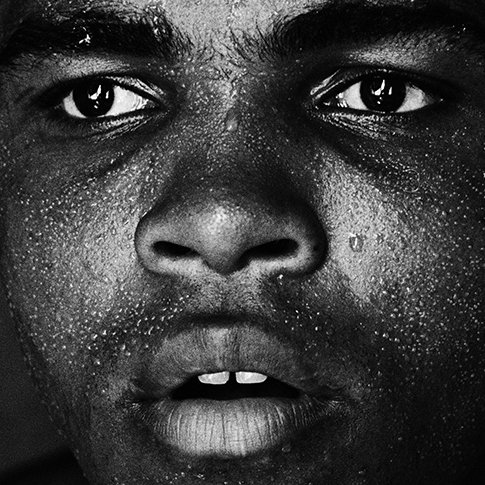