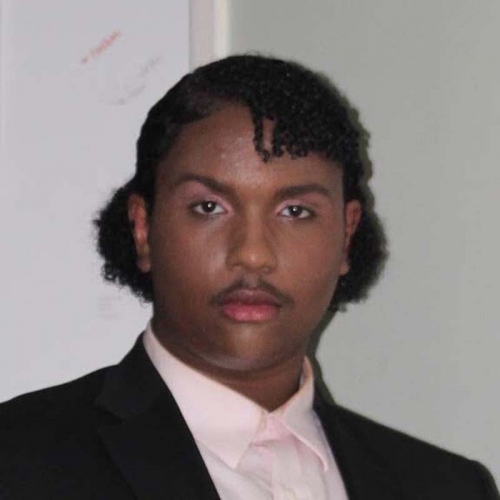 Mosab Hamid is an artist from Brooklyn, New York. Inspired by the work of influential Black and queer artists, as well as the chaotic magic of their hometown, Mosab’s artistic musings began with rap battles on the playground and doodles in notebook margins. Nurtured by dedicated teachers and mentors, Mosab’s art evolved into their life’s passion. Be it visual, performative or written, Mosab engages critically with sociopolitical discourses surrounding themes of identity, community, and justice. They currently attend Wesleyan University, where they continue creating impactful and honest work that strives to imagine and galvanize a liberated future for their generation.

I am genderqueer and pansexual. Or, in other words, I am indecisive. Or, in other words, I am a disgrace to my Arab heritage and Islamic religion. I imagine that there are queer people living in Khartoum, my parents’ hometown in Sudan, but I will not be one of them. There’s not even a word for who I am in Arabic. Surely, if they don’t even possess the capacity to speak about me, they could never accept me.

I’ve always hated sports, much to the chagrin of my father, who is a soccer coach and was a star player on the Sudanese National Team before a knee injury ended his career. I feel that he’s always resented me for my disinterest in sports. Maybe he was seeking to vicariously fulfill the dream that he never lived to completion, or maybe not. Either way, I’ve always felt isolated from my father because I’m nothing like him.

My mother is the better of the pair, but still the Hillary Clinton in the 2016 election that is my life. Or, in other words, the better of two evils. I talk to my mother, or at least I used to. Now we mostly argue. I’m always the first to cave in and apologize. Because she’s relentless, yes, but mostly because I pity her. I feel stuck a lot of the time, but my mother is stuck--a lot more than I’ll ever be.

That’s why my scorned relationship with my mother has been so hard for me to come to terms with. It’s easy to hate my father; I learned from my mother. She will often remind me and my siblings that she’s just waiting until we’re all in college to leave him. He’s always been the villain; my mother has always been the hero. Imagine living in a two-bedroom apartment with Superwoman and knowing that she can never save you.

But I’m getting ahead of myself.

My earliest memories are of my parents chastising me for playing with my sister’s dolls; I remember her Kim Possible one was my favorite. But, I couldn’t play with it for fear of getting yelled at. Or worse.

On my way to school with my mom one morning, I found a McDonald’s happy meal doll of a character from Winx Club, which was a popular TV show about teenage fairies. The irony of that was lost on me then. The doll had a keychain attachment so I clipped it to my backpack. Finally, a doll of my own. But, one day some boys at school made fun of me for having a “girl toy.” I came home crying and told my mom what happened. I cried myself to sleep that night. And when I woke up the next morning, I couldn’t find it anywhere.

For a long time, I assumed I had just lost it. It wasn’t until years later that my mom confessed to taking it off my bag and throwing it away.

I’m sorry, habibti (my love). But you came to me crying. I don’t like to see my baby crying. Her voice was smooth and sweet like the tea she used to make for me on days when I was sick. A passed-down recipe for manipulation. She told me she was afraid for me, that she did what she thought she had to do to protect me from the bullies. And I swallowed her words as easily as I swallowed her tea; ignored the burn. But neither made me feel any better.

One summer, Eid al Fitr came to remind us that Ramadan had come to an end. Tradition is to pack together in cars and go from house to house to celebrate with friends and family. So my brother, my cousin, and I are in a van with my uncles. They’re both eleven, I’m only nine.

I always liked riding with them, because I could feel like one of the boys. Even though my head started to hurt after I spent entire car rides trying to translate their sports talk to a language I could understand, it always felt nice to sit in. Somewhere along the way to someone’s house, I muster the courage to speak myself.

Shut up, nobody asked you. My cousin isn’t too pleased with my sudden urge to share.

Shut don’t go up, prices do, so take your own advice and shut up, too.

Only girls say that, stupidhead. You a girl now?

Yeah you are, that’s why nobody likes you.

Nobody likes you either. Dumbass! I’d never cursed at someone before.

Whatever, faggot. I pause. I’ve heard that one before. My siblings all call me that, too; even my six-year-old little brother. I clench my fist so tight I feel my nails pierce the tender skin of my palm. My eyes begin welling up as they did back in Sudan. Those memories, their pain, come flooding back. I throw myself at my cousin and start swinging as hard and as fast as I can. Crying, screaming, kicking, punching. My brother sits there, watching. My uncles hurriedly pull the van over, get out, open the passenger door and pull me off of my cousin.

It isn’t until the adrenaline dies down that I realize I’m bleeding. My cousin had scratched my cheek. It’s deep. So deep I still have the scar. At dinner that night, of course my father notices the gash on my face. He demands that I tell him what happened. When I do, to my surprise, he is livid with me. He is angry that I didn’t tell him, sure, you could say that. I know, now, though, that he was angry because I was someone that people would call what my cousin called me. He was angry because I was not the boy my brother was. My brother was tall, fit, athletic, and his voice boomed when he spoke. He wore basketball shorts preferable over my skinny jeans. He walked like he owned the sidewalk--no, the entire city--just like my father had taught him. No one ever called my brother that word. Frustrated, desperate, and embarrassed, my father tries to beat the faggot out of me that night.

The next morning, he calls me into his room. You always have to do something special, huh? Special is a bad word to my father. When he says “special,” it’s an indictment.

No. He started it. My voice quivers.

I don’t care. You should have told me. What did I tell you about lying? Huh?

Exactly. Don’t do stuff you don’t know about. It doesn’t make much sense, what he’s saying. His English was never very good. He pauses, realizing he misspoke. Come here. He reaches to pull me in for a hug. I flinch. I don’t like to beat you. You know that right?

But when you do stupid shit, you make me beat you. I don’t want anyone calling you those bad things, you understand? You’re my son, no one talks to my son like this. And I’m your daddy, so I have to teach you the way. I do it because I love you. You’ll understand when you grow up and have kids. He pulls away, and puts his hand on my shoulder. I love you. I believe him.

Years later, I find myself talking with my mother about that incident. She laughs when I tell her what my father said. She reminds me that when I was younger, when my dad got angry with me, he would always yell at me and call me how’ell. It’s an Arabic word, and I had no idea what it meant, so it never stood out in his arsenal of degrading language. My mother chuckled as she told me it was the Arabic word for faggot. I began to laugh along with her.

Isn’t it funny? I guess there is a word for me in Arabic after all.