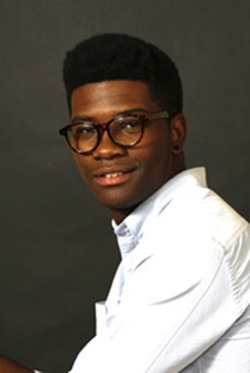 Elliott Skinner, 2012 YoungArts Winner in Voice, is an 18 year old jazz and contemporary vocalist from Dallas, Texas. He attended Booker T. Washington High school for the performing and visual arts. He has had a connection to music all of his life, even growing up in a family full of sports enthusiasts. While growing up with three siblings whose lives were engulfed in sports, Elliott’s family never stopped supporting him. Elliott has performed at many venues in Dallas, including the House of Blues. He has performed alongside Keith Urban at the ACA’s, opened for Sarah Jaffe, and has performed for all living recipients of the Congressional Medal of Honor. He has won an “outstanding soloist” for downbeat student music awards and the next generation jazz festival. Elliott leads worship in the youth ministry of his church every Sunday and after, has a private lesson with his 11 year old student in voice and piano. He will be attending Berklee College of Music in the fall to pursue a career in jazz voice, composition, and music education.