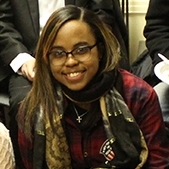 Alma Osorio is a young artist born and raised in The Bronx. Her dream is to write and create films that are encouraging to young girls around the globe. One of her biggest accomplishments thus far includes traveling to Kampala, Uganda with the Ghetto Film School at the age of 16 with a full crew to direct the short film, “Live, Joseph,” that later aired on the Sundance Channel in 2008.

Alma has been featured and interviewed on the Brian Lehrer Show on WNYC and NPR’s “All Things Considered.”  A graduate of New York’s famed LaGuardia High School for the Arts, Alma is currently studying Film and Television Production at New York University’s Tisch School of the Arts.  She is excited to watch her life unfold with every opportunity she is blessed with."