On September 29, 1998, 177 hip-hop artists, producers, and influencers gathered at 17 East 126th Street in Harlem to pose for what would become one of the music industry’s most iconic photographs. A Great Day in Hip-Hop, first published on the cover of issue #7 of XXL magazine, was Gordon Parks’s homage to Art Kane’s 1958 photograph of 57 jazz musicians spilling off the same Harlem brownstone stoop for Esquire magazine. Kane’s photograph—commonly referred to as “A Great Day in Harlem”— became a popular culture icon and model for countless homages recording other historical gatherings, ranging from A Great Day in Hollywood to a Dutch version titled A Great Day in Haarlem. Yet Gordon Parks’s 1998 homage, created on the 40th anniversary of Kane’s image, is the only one among them that reached the original’s iconic status, not least because of Parks’s keen understanding of the importance of the image’s backdrop.

The 1998 shoot was in fact Parks’s second visit to that iconic brownstone. In 1995, Life magazine assembled 10 of the 12 surviving musicians from Kane’s picture, and Parks photographed them standing where they had stood in 1958. In the image, the boarded-up facade of the now dilapidated brownstone emphasized the absent musicians who had died. Writer Michael A. Gonzales said, “As a Harlem boy born a few blocks away from the brownstone where Kane shot the ensemble of jazz musicians, I knew firsthand how much the community had changed in the 40 years since the original picture was taken. That neighborhood had seen it all—from riots and blackouts to heroin and the crack years.” 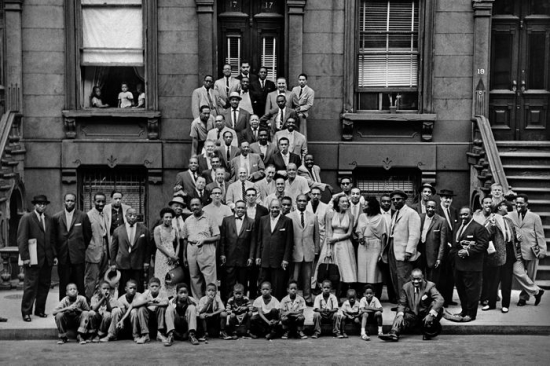 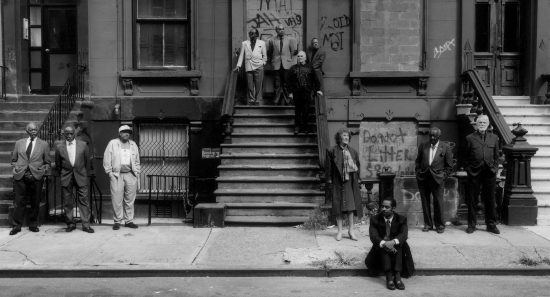 Three years later, that block would be transformed by another of Parks’s photographs, this time for XXL magazine. The 177 participants were assembled, as Editor-in-Chief Sheena Lester later recalled, by sending out “an open call for every artist or figure—old school and new, indie soldiers and major-label chart-dwellers alike—who’d made an unquestionably noteworthy impact on hip-hop music and its progress or had ever recorded a rap album.” The participants overflowed from the stoop of brownstone number 17 to the two stoops on either side. The representatives of this new golden age in music overtook the dilapidated brownstone, reclaiming the space for the next generation and bringing it back to life.

Significant to the photograph is its location, as well as its evolution over the four decades between the two photographs. Located one block north of 125th street—known as Harlem’s “main street”—the chosen site for the photographs at 17 East 126th Street was a short walk from several of the neighborhood’s famed cultural spots, from the historic Apollo Theater (founded 1914, located at 253 West 125th Street) to the Studio Museum (founded 1968, originally located at 2033 Fifth Avenue, and relocated to 144 West 125th street in 1982). These and other sites speak to the history of Harlem as a cultural capital, which began in the 1920s during a period known as the Harlem Renaissance, when an early wave of the Great Migration led an influential generation of black writers, musicians, and other social figures to establish the neighborhood as a site for innovative, creative production that never ceased. Over the past century, depictions of this rich history—by photographers ranging from James Van Der Zee (American, 1886–1983) to Gordon Parks—include the landscape of Harlem’s residential streets, in particular its brownstones and stoops. This vernacular architecture has become an iconic, familiar backdrop to the neighborhood’s history of creativity, hardship, and community.

Stoops like the one seen at 17 East 126th Street, were originally designed to add architectural grandeur but also, importantly, to raise the entrance above the horse manure left behind by carriages. Spilling down into the street, these stoops became a kind of social stage for gatherings and impromptu performances. By the late 19th century, as tenement districts became overpopulated, stoops were swarmed by residents looking for communal spaces that enabled them to escape the indoor crowding and heat. As residents of affluent neighborhoods increasingly began to flee the city in the summer months, a stigma was attached to the stoop as a space for the lower classes. Nevertheless, in Harlem the stoop proudly remained a social and creative space that represented community ties—and regained its influential status over the years.

On Harlem’s stoops and residential streets aspiring and well known artists, authors, and musicians hung out, exchanged ideas, and met their collaborators. Brownstones similar to those at 17 East 126th street are seen in images ranging from James Van Der Zee’s iconic 1920s photographs of Harlem’s middle class residents, to Gordon Park’s earliest assignments for Life magazine, which exposed the harsh realities of racism and the black experience in America. The common thread throughout all of these photographs is the importance and value of community and collaboration to Harlem’s enduring influence and strength. A Great Day in Hip-Hop owes a debt to the history of photography in Harlem’s streets—one that Gordon Parks helped pioneer. Above all, it speaks to the revolutionary history and influence of Harlem’s look, feel, and sound.