Weinstein Gallery is pleased to present an exhibition of photographs by internationally recognized artist, Gordon Parks, on the centennial of his birth.

“In my youth, violence became my enemy… Photography, writing, music and film are the weapons I use against it…” -Gordon Parks

Weinstein Gallery is pleased to present Gordon Parks: At 100, an exhibition of 40 important photographs by the internationally acclaimed artist, Gordon Parks. A preeminent photographer, poet, novelist, composer and filmmaker, Parks was one of the most prolific and diverse American artists of the 20th century. His photographs span from the social commentary of the photographic icon of American Gothic, to Paris high fashion for Vogue. Parks’ photos chronicled the Civil rights movement in Life Magazine for two decades, and his portraits of celebrities like Ingrid Bergman brought him additional levels of fame and distinction.

As a filmmaker he was the first African American man to direct a major Hollywood production with the poignant memoir of his youth, The Learning Tree, and he broke new ground with a hip and provocative African American hero in Shaft, a movie that continues to be a pop culture classic.

For its initial exhibition of Parks’ work, Weinstein Gallery has selected images that reflect the photographer’s cross-cultural, poetic and humanistic vision. This exhibition of 40 works encompasses Parks’ photographic evolution from rural Kansas and early years in St. Paul to his decades of work as a Life photographer, and is contemporaneous with the Gordon Parks Foundations celebration at the Museum of Modern Art in New York honoring the life and accomplishments of a groundbreaking artist. 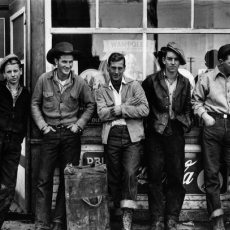