When sports and art collide with the impact of “March Madness,” a show of 28 artists opening March 18 at Fort Gansevoort, our games become metaphors, our heroes are transformed, even our golf bags reveal secrets. The artist’s eye finds the corruption, violence and racism behind the scoreboard, and the artist’s hand enhances the protest.

To fans, “March Madness” refers to the hyped fun and games of the current national college basketball tournament. To Hank Willis Thomas and Adam Shopkorn, organizers of these 44 works, it reflects the classic spirit of Tommie Smith and John Carlos raising the black power salute at the 1968 Olympics, of Leni Riefenstahl’s film of the 1936 Berlin Olympics, of George Bellows’ painting of Dempsey knocking Firpo out of the ring.

The boxer in this show is still. The legendary photographer Gordon Parks reveals Muhammad Ali, the leading symbol of athletic protest, in a rare moment of stunning silence. The boxing champion is framed in a doorway, praying.

Contrast that to the in-your-face fury of Michael Ray Charles’ “Yesterday.” A powerful black figure in a loin-cloth bursts through a jungle to slam-dunk his own head through what looks like basketball hoop of vines. A cameo of Abraham Lincoln looks on. Is the artist suggesting that the end of slavery is the beginning of March Madness? More subtle but no less troubling is Charles’ rendition of the face of O.J. Simpson on the cover of “This Time” magazine entitled “The Fall of Proper Nigga.”

There is rage to spare in Robert Longo’s charcoal painting, “Hands Up,” as five St. Louis Rams football players storm onto the field with their arms in the air. These gladiators are protesting the 2014 shooting death in nearby Ferguson of an unarmed young black man who was reportedly surrendering to a white police officer.

Hank Willis Thomas’ commentary on race is often witty, sometimes shocking. It has ranged from such pleasing images as quilts made from basketball jerseys to troubling images of athletic torsos bearing Nike swoosh scars, football players running the ball through chaos, and basketball players rising to meet a hoop shaped like noose.

The diversity of image suggests how rich is the field of play. Glen Kaino’s runner bursts out of a mottled, obscured background as if he is sprinting through his own mind. What the artist has obscured are traces of a Newsweek cover entitled “Angry Black Athlete.” Does Kaino want to obscure such a glib ‘60’s description of hundreds of years of racial oppression? Who wouldn’t be angry about that?

In Pamela Council’s “Ray Lewis Needs Love,” the face of the beloved and reviled former Baltimore Ravens’ linebacker is framed by strong, dirty fingers with purple nail polish. An acknowledged superstar, Lewis pled guilty to obstruction of justice in connection with the stabbing deaths of two men in a 2000 brawl. He avoided prison by testifying against his two companions. He also settled with survivors in a civil suit. Now a popular broadcaster, he is still polarizing. Why does he need love and from whom? From us?

Sometimes the message is blunt. In Emory Douglas’s cartoon panel, “Olympics,” a young African - American wins a gold medal in track and field but returns home to be harassed at gunpoint by the police, echoing Ali/Cassius Clay’s experience of returning to be “the Olympic nigger.”

Even sporting gear carry implications here. Charles McGill adds to the already symbolic load of the golf bag; what piece of sporting equipment lugs more classism, racism, and inequality? Yet in McGill’s structured versions there are club protectors that suggest KKK hoods and straps that evoke slave restraints.

Cheryl Pope has subverted the kind of colorful banners that hang from the rafters of a high school gym proclaiming a championship team. Here they carry the desperation of the students in the grandstand. “Why Did He Do It” asks one banner. Another wails, “Sometimes I Feel Replaceable.”

Jeffrey Gibson, who is a member of the Mississippi Band of Choctaw Indians and half Cherokee, used Native-American craft motifs to fancifully dress heavy punching bags with bright designs and beaded skirts. The ornate results have been called gender bending.

What to wear to punch such heavy bags other than Satch Hoyt’s “Neverlast,” a pair of boxing gloves that parody the Everlast originals with a delicate red design. Could this also be combat gear for romantic partners?

The show’s organizers are clearly those rare fans who can see through the madness, beyond the white lines. 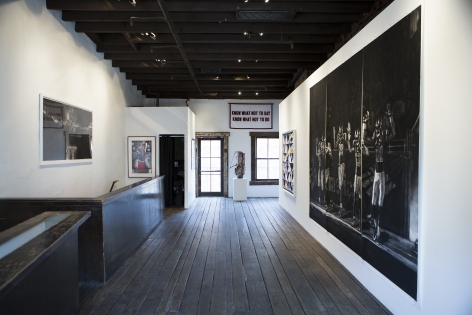 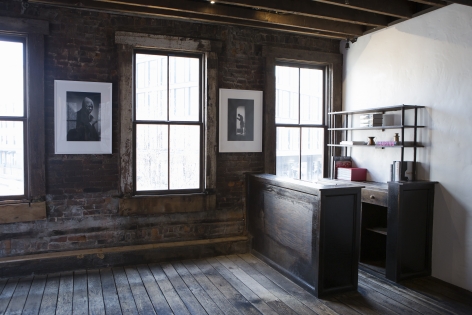